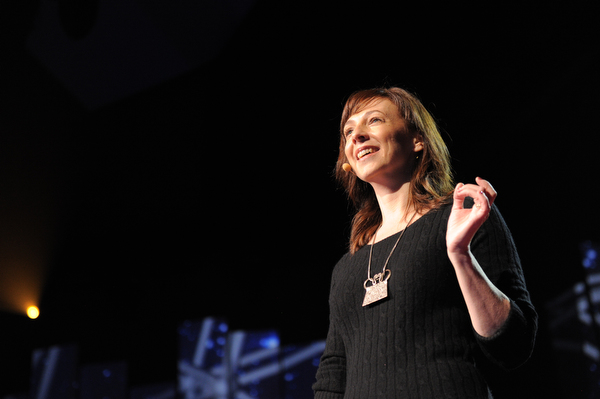 Susan Cain, the author of Quiet: The Power of Introverts in a World That Can’t Stop Talking, is an introvert. So as she gets up to present from the TED2012 stage, bag in hand, it is not a comfortable experience. But it’s an important one, and that’s the point.

Her family grew up reading — they would read together and bring books on trips. That’s how they were social. She tells a story of going to camp at age 9. Her mother packed her a bag full of books to read quietly, the normal thing her family did on vacation, thinking camp would be the same, “I had a vision of ten girls sitting in a cabin reading books in their matching night-gowns.” But when she got to “Camp Rowdie” (as they spelled it), she was ridiculed the first time she read her book, for not being social and outgoing and not having enough camp spirit. So she put her books away, and didn’t get them out for the rest of the summer. (And she drives the point home by putting her bag under a table.)

She has, she tells us, at least 50 stories like that. 50 ways, little and small, where the message was clearly sent: being an introvert is wrong.

And that bugged her. Cain felt — had an intuition — that as an introvert she had value. But she didn’t know how to articulate that at the time, and so she became a lawyer. She wanted to be an author, but all her internalized notions about what is good made her reflexively choose the profession associated with extroversion, choose to go to a bar rather than a nice dinner with friends.

That bias, she claims, is everyone’s loss. While the world certainly need extroverts, it also needs introverts doing what they do best. It’s a bias that has no name. To understand it, we need to understand that introversion isn’t about not being social, it’s not being shy, it’s about how someone responds to stimulation. While extroverts crave social interaction, introverts are much more alive while they’re alone. Cain brings in her thesis with the insight that, “The key to maximizing talents is to put yourself into the zone of stimulation that’s right for you.”

It’s a simple-sounding lesson, but a very difficult one to really get, and act on.  As she points out, we’re living in a culture that increasingly values groupthink. We believe that creativity comes from a very oddly gregarious place. In the classroom, where Cain and her fellow students used to sit in rows, and to read and work alone, students are increasingly put in groups and asked to be committee members — even for solving math problems or creative writing. Kids who prefer to work alone are seen as problem cases, and graded accordingly. Teachers report, and believe, that the ideal student is extroverted. (“Even though introvers get better grades, and are more knowledgeable.”)

And it’s the same in office environments. Introverts are routinely passed over for leadership roles. That’s a real problem because research has shown that, as leaders, introverts are more careful, much less likely to take outsized risks, and are more likely to let creative and proactive team members run with their own ideas, rather than run over them or squash them — something that should be an ideal trait in the modern office.

Indeed, says Cain, some of the most transformative leaders in history — Eleanor Roosevelt, Ghandi, Rosa Parks — were introverts. Each of those described themselves as quiet, soft-spoken, or shy. That quietness had a special, extraordinary power of it’s own. People could tell that these leaders were there because they had no choice, because they were doing what they thought was right.

Of course, Cain loves introverts, and no one is purely intro- or extroverted. We all fall somewhere on that spectrum. But most of us recognize ourselves as one or another, and “culturally we need a better balance, we need a better Yin and Yang between these two things.”

Solitude, as Cain says, is a key to creativity. Darwin took long walks in the woods and turned down dinner invitations, Dr. Seuss wrote alone, and was afraid of meeting the kids who read his books for fear they would be disappointed at how quiet he was. Steve Wozniak claimed he never would have become such an expert if he left the house. Of course, collaboration is good (witness Woz and Steve Jobs), but there is a transcendent power of solitude.

Indeed, most major religions have seekers, Buddha, Jesus, Mohammed, each went into the wild to learn. No wilderness, no revelation.

And the things we’re learning from psychology affirm this. We can’t be in a group of people without instinctively mirroring each other, and groups follow the most charistmatic person, even though there is no correlation between being a good speaker and having great ideas. (Hesitant, then full laughter from the TED crowd.)

But why are we getting it so wrong? Part of it is our history. “Western societies have always favored the man of action over the man of contemplation. Well, ‘man’” On top of that, people are moving to cities and new places, and instead of working with people they’ve known their whole life, they have to meet and impress new people. That leads to a way of thinking that values being outgoing and charismatic.

Again, she is not talking about eliminating teamwork. Those same religions all teach love and trust, and we need that more than ever. But the more freedom we give introverts to be themselves, the more freedom they’ll have to come up with their own creative solutions.

Cain steps back to her suitcase and offers to tell us what’s in it now. It turns out to be: “Books!” Three, in fact: Milan Kundera, Margaret Atwood and Eumonides. Those, it turns out, are her grandfather’s favorite authors.

Her grandfather was a rabbi. He lived alone in a small Brooklyn appartment filled with books, and it was Cain’s favorite place. He loved to read, but also loved his congregation. He read constantly, and he “took the fruits of his reading and would weave these intricate tapestries” for his congregation. And yet, as he talked, he had trouble making eye contact with the same people he had led for 62 years. Late into his life, when someone called him, he would end the conversation early, for fear he was wasting their time.

And when he died at age 92, the police had to shut down the street because of the throngs of admirers who wanted to pay their respects.

Following in his example, Cain wrote her book. It took her seven years to write; seven years of reading, researching, thinking — total bliss. And now that it’s done she needs to go out in the world and talk about it. That’s not something that comes easily, or comfortably to her. But she’s excited about it, this “year of speaking dangerously,” because she thinks the world is on the brink of change in how we treat introverts.

To help that along, she has three calls to action:

1) “End the madness of constant group-work.” (The audience applauds.) Offices need chatty conversations, and great spaces to make serendipitous interactions. But we need much more privacy, and more autonomy. The same is true — more true — for schools. Yes, teach kids to work together, but also how to work alone.

2) “Go to the wilderness, be like Buddha. Have your own revelations.” You don’t have to go build huts in the woods and be isolated, but we could all stand to unplug and be in our heads for a time.

3) “Take a good look at what’s inside your own suitcase, and why you put it there.” Extroverts, whose bags might be filled with Champagne bubbles and sky-diving kits, grace us with the energy and joy of these objects. Introverts probably guard the secrets of their suitcases, and that’s cool.

In a sign that she’s right that change is coming, almost the entire auditorium, introvert and extrovert alike rises to give a standing ovation.